the snowmageddon that buried the roads uncovered a network of people here to help, support, and enjoy each others company.

in the aftermath of snowmageddon we can channel those strengths to golo10 - increase our local choices by 10%, and build economic resilience in our communities.

SoE minus three hours. the storm was coming.  it was even announced the day before that schools and many companies would be closed.  this shot was taken early in the morning before it got going. supermarkets were closed so i hoofed down to the neighbourhood store for extra staples. neighbourhood stores are becoming few and far between.  in addition to offering staples, they are a hive for community.

the long lead time enabled the preparation of storm tweedies - cake-like cookies that resemble tweed - which were something to enjoy while hunkered down. taken best with coffee.  there are many NL coffee roasteries.  the one in the cup is from Trinity Coffee Company - Kenya roast.

SoE Day 2 - around noon on Saturday the wind stopped blowing. where there had been cars and roads and sidewalks, the settled snow changed the landscape. people started to do the work to get to each other.

the enormity of the situation called even the teenagers into action. without being asked they suited up to take down what seemed an impossible task. all hands were out. the cat, however, refused to look.

a snowshoe around the neighbourhood loop showed people out and on the move but the previous hours had brought scary times. it took snow plows as well as fire trucks to respond to a fire in an uninhabitated house in the height of the storm. herculean efforts of the Emergency Response Teams contained the blaze - no injuries in what could have been a community tragedy.  what was left was a burnt-out house, glimmering trees and an ice-road.

the plow came around 2 pm (much earlier than expected!) and hove up tonnes of snow, leaving a white wake for neighbours to navigate and dig each other out.

with the path cleared neighbourhood kids now together found each other again.  and went sliding.

blowing through snow that's over your head is a three-person job, and there's an art to beating down the banks. who knew?

four hours.  seven hands.  three snowblowers and the cut is through!  two cars located but only neighbhourhood foot traffic in the foreseeable future.

SoE Day 3 - Sunday. the snowmageddon that buried the roads uncovered a network of people here to help, support, and enjoy each others company. neighbour dig-outs united people in a common goal.

SoE Day 6 - Wednesday. the State of Emergency and the absence of school, work, and scoting out in the car left time for excellent leisure activities - like the sunset showshoe

SoE Day 7 - Thursday - restrictions for essentials are easing and facebook is bursting with people wanting to support local!

SoE Day 8 and beyond - along with the three feet of snow and eight days in a State of Emergency, stormageddon 2020 brought more things.  it brought people coming together, having time to explore the neighbourhood, and time to think about what builds a strong, resillent community.

guide to the good is about connection, and our main line is promoting local companies because they offer economic, environmental, social and other benefits to people.

the snowmageddon that buried the roads uncovered a network of people here to help, support, and enjoy each others company.  in the aftermath of snowmageddon we can channel those strengths to golo10 - increase our local choices by 10%, to build economic resilience that parallels our culture of community, humanity, and resilience.

kim is the CCO for the Guide to the Good social enterprise. snowmageddon - the record-breaking snowfall that buried eastern Newfoundland pulled out all the stops and pulled people together. proximity is connection. go local. be vocal! 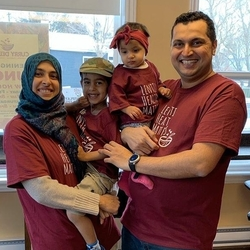 together and forward for Curry Delight

Afiya and Nasir of Curry Delight have grown their business - and their family - in step with the market! 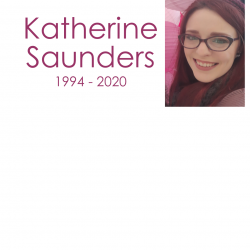 Katherine was our Publication Specialist from September 2018 to September 2019. She was a bright, bright spark. In her too-short-a... 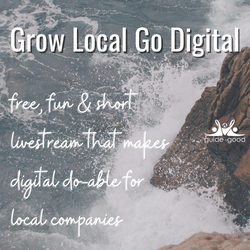 Home-made foods and knitted creations are green gifts that a Newfoundlander away gives at Christmas. Kelly hopes to receive gifts ...